In Advance of Azar Hearing, NARAL Members Deliver Petition Signed by Tens of Thousands of Americans In Support of Reproductive Freedom

While the Senate HELP Committee holds a hearing on Alex Azar’s nomination to lead the Department of Health and Human Services, NARAL members delivered petitions in support of reproductive freedom and against the Trump administration’s recent work to significantly roll back access to birth control. 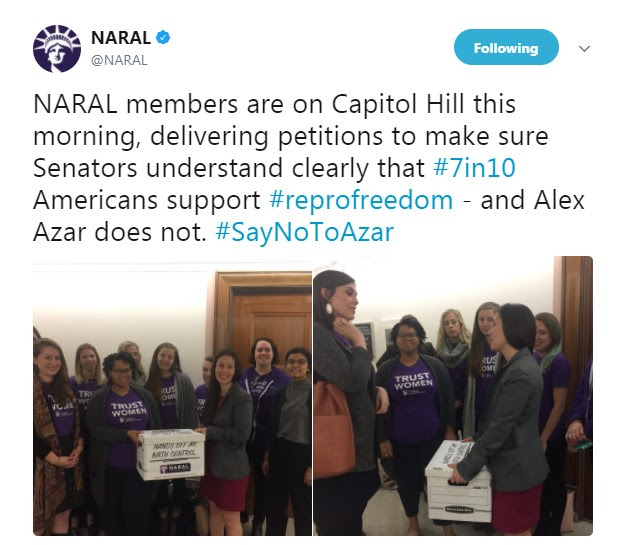 Said Kaylie Hanson Long, NARAL Pro-Choice America National Communications Director, “When the Trump administration takes away access to basic healthcare like birth control, and selects anti-choice officials like Alex Azar to lead our nation’s healthcare department, it is robbing countless women of our dignity, our ability to determine our own futures, and our ability to become equal partners in society. Today we’re making sure senators understand clearly that the American people stand in support for reproductive freedom, while Alex Azar clearly does not.

“If the Senate chooses to confirm Alex Azar, we can only expect more dangerous attacks from the Trump administration. We need someone who will hold Trump accountable and stand up for our nation’s women and families. That is not Alex Azar.”

Last month, the Trump administration issued new rules that allow employers to deny their employees access to birth control for essentially any reason. This action severely undermines the Affordable Care Act’s birth control benefit, which saves women over $1.4 billion a year. This policy ensured that millions of women could access affordable birth control, giving them more control over their own lives and their own destinies.

As Donald Trump and HHS attack our rights, Azar’s anti-choice record should concern all Americans. In a speech to the Islamic Medical Association of North America in Chicago, Alex Azar thanked the group for its “emphasis on protecting the health and well-being of the unborn” and stated it was a cause he is “committed to as well.” He is also an outspoken opponent of the ACA and has donated to many anti-choice politicians.